Most families traveled more than four hours to get to the hospital. Some travelled up to 16 hours by bus. One family walked three hours just to arrive at a bus stop. A woman arrived with her 15 year old son, Osvaldo, who had been bullied at school because of his deformity. The mother said they lived in a remote village and that she had not been aware that what her son had was called a “cleft lip and palate” or that a surgery existed to repair it.

Osvaldo had been taking his First Communion classes when the priest took his mother aside and told her that his deformity could be fixed and that a foreign medical team had arrived in Retalhuleu. The priest drove them to the bus station immediately and bought their tickets for them. The mother and son arrived with only the clothes on their back, without even money for meals. Luckily, they were taken to the Rotaplast Mission Coordinator who distributed meal tickets for parents who had children undergoing surgery. Osvaldo’s surgery was a success. The first thing he asked for when he woke up was a mirror to see his new face and smile.

Dr. Gray with Antony, Jacelyn, the anesthesiologist and nurse 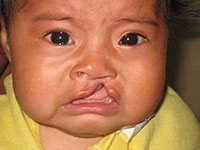